About me
My name is Marianna Zsoldos, I studied humanities and languages at university. I have a teacher’s degree, I taught

I was always interested in different consciousness techniques, especially in vedic philosophy, yoga, meditation, mind control. I studied vedic philosophy, have been to India, lived in an ashram and I’ve been on a pilgrimage in South Indian temples and ashrams.

I was also interested in energy healing, I tried to find out what energy can do, so I studied Prahna Nadi healing technique. Prahna Nadi technique has a past life travelling part as well, if you have more deep problems, if there are stories under the blocks, they can come into the light and by recognizing and releasing them they can be solved.

Kinesiology
I completed a Natural Healing school, and specialized in kinesiology, and now I work as a transgenerational epigenetic kinesiologist. This long and frightening word means that I can treat problems not only in your present life, from conception, but in generations and dimensions as well.
I have a three level degree in TEK. (Transgeneration Epigenetic Kinesiology)
1. Basic level : Stressful connections, Generation patterns.
2. Metabolic kinesiology- for different health problems, weight problems, and food-and diet problems. I can test with kinesiology what food exactly your body require and what is harmful for you.
Reconstructional kinesiology – for finding out the goal of life and the obstacles.
3. Dimensionmatrix. Allergymatrix
4. Coach kinesiology – to speak about the future as well.

My role in life is to dig down deep as far as the roots, and bring to the light those patterns that obstruct the harmonious being. Kinesiology is a very special tool for this, because using muscle testing I get clear answers from the body.

Access Bars Access Consciousness
By the way I completed several courses of Access Bars and became an Access Bars facilitator as well. This is a method witch helps you to know what you know and feel easy and joy and lightness. It is a kind of consciousness technique.
After lots of years of preparing I felt the need of helping others in their needs and problems. 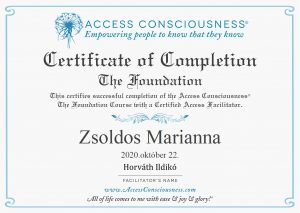 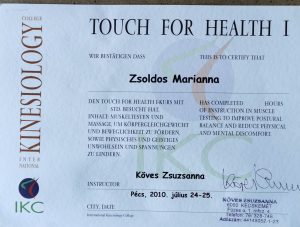